Posted by admin in Featured on February 26, 2011 with No Comments

A recent end-user study (Feb 2011) on Cloud Computing conducted by Frost & Sullivan reveals insights on the paradigm shift in the computing industry.

The study was conducted with 330 senior IT decision makers across  the Asia Pacific, 55 of which were from Malaysia. Here are the findings:

The research analyst indicated that,  “A growing number of enterprises in Malaysia are looking to move their applications and infrastructure into the Cloud. This is primarily being driven by their increasing awareness of the advantages of using ‘IT as a Service’ – the lower total cost of ownership, predictable costs and the ability to scale up or down depending on business needs.”

We at SKALI Cloud have contributed to that study ourselves, we have shared that most of our clients patterns and their business decision-making process, as well as their overall awareness on the benefits of adopting the cloud services. Malaysian enterprises realised that with SKALI Cloud’s offering, they now have another option to consider (instead of the traditional models).  Most understood the benefits, however they are wary of the complication of the move (new tools, new technology, new ways of doing work), and that is the reason why we are here locally in Malaysia to assist you with your cloud computing projects.

Call us, we show you how.

10 Cloud Predictions for 2011 — by Forrester Research

Posted by admin in Featured on December 18, 2010 with No Comments

Famous Forrester’s Principal Analyst James Staten has posted his 10 Cloud Computing Prediction for 2011. Specifically in the area of Infrastructure-as-a-Service (IaaS) — where SKALI Cloud’s niche market is. He sees the increasing  importance of cloud computing to organisation worldwide, it drives the costs down, provides flexibility, however it creates a widening gap between those that take advantage of cloud computing and those that don’t.

IaaS is one of the 15 technologies listed in the Top 15 Technology Trends EA Should Watch_2011 To 2013 report released last month, and in his blog, James elaborates this in greater detail.

Go ahead for the details on his blog – he drills deeper on each of the above points.

At SKALI, we are putting our bets on providing the most reliable & flexible cloud-based infrastructure services suitable for the SME market and many large enterprises web projects. Our platform runs on any OS including Windows and all Linux variants. We have Persistent storage and servers. Resources are bought individually with no bundling in a flexible pay-as-you-go model. It means you can instantly create, start, stop and delete servers as and when you need them. We turn CPU, RAM, data storage and data transfer into utilities similar to your electricity and water usage. We give you exactly how much of each as you need them over time.

What would be your next year cloud prediction?

Posted by admin in Featured on November 15, 2010 with No Comments 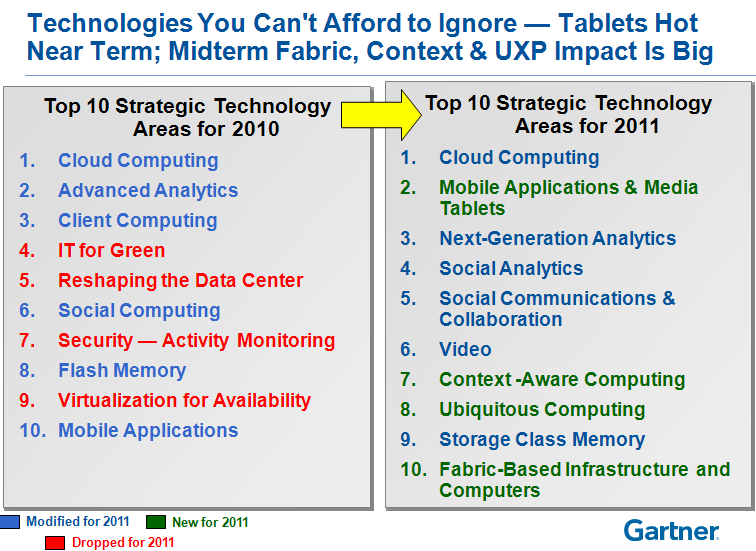 Recently Gartner research issued a press release indentifiying what it belives will be the top 10 strategic technologies for 2011.

No big surprises here, other than the inclusion of things (at least at the headline level) that we already take for granted.

A strategic technology may be an existing technology that has matured and/or become suitable for a wider range of uses. It may also be an emerging technology that offers an opportunity for strategic business advantage for early adopters or with potential for significant market disruption in the next five years.   As such, these technologies impact the organization’s long-term plans, programs and initiatives.

The 10 Strategic Technologies identified are:

Go ahead to the Gartner site to read the details.

At SKALI, allow us to assist you with your plan in moving to the cloud easier. As you may have heard, embracing cloud computing technologies is more of a sourcing option rather than a technology one. Though reducing cost remains  the primary expected benefit of Cloud, research has showed that companies moving to the cloud mainly due to it’s flexibility & speed of deployment, rather than cost.

See how flexible is it now to create servers, and not to deal with hardware on our cloud services. Don’t believe what we say, try yourselves bysigning up on our Beta trial, and tell us what you think.

Cloud Computing at the Peak of the Hype Cycle

Posted by admin in Featured on October 25, 2010 with No Comments

Gartner (the analyst firm), has released it’s 2010 Hype Cycle Report recently, that identifying those technologies that they think have reached the “Peak of Inflated Expectation”. See below the chart from Gartner (Aug 2010).

Cloud Computing is among those at the peak. It means these technologies may be on their way to mainstream, or one of disillusionment (maybe those technologies failed to live up to expectations).

Gartner’s report examines 1800 technologies as well as trends in 75 industry and topic areas. These reports are meant to provide a snapshot into emerging technologies, as well as estimates in the time until these technologies become mainstream. Cloud computing and e-readers, according to the report will be mainstream in less than 5 years.

Check out the full report.

Cloud Computing opportunity by the numbers

Posted by admin in Market Update on October 17, 2010 with No Comments

Interesting article posted by Reuben Cohen on his popular cloud computing blog. He shared some of the industry numbers surrounding the opportunities that cloud computing has right now (not sure what’s his source)..

Some excerpt of what he says…
——

Google currently controls 2% of all servers or about 1 million servers with it saying it plans to have upwards of 10 million servers ( 107 machines) in the next 10 years.

98% of the market is controlled by everyone else.

Hosting / Data center providers by top 5 regions around the world: 33,157

The amount of digital information increased by 73 percent in 2008 to an estimated487 billion gigabytes, according to IDC.

——
Go ahead to his blog, that he has recently updated it further… enjoy.

Gartner says 80% of enterprises have a virtualization project

Posted by admin in Market Update on October 6, 2010 with No Comments

Gartner says one out of every four server workloads will be in a virtual machine by the end of 2010, and that enterprises should attempt to double or triple the size of their virtualization deployments.

“More than 80 percent of enterprises now have a virtualization program or project, but only 25 percent of all server workloads will be in a virtual machine (VM) by year-end 2010,” Gartner reports, suggesting that the analyst firm believes enterprises haven’t gone far enough. Virtualization is “the highest-impact issue challenging infrastructure and operations,” the analyst firm says.

Virtualization has been around for decades on the mainframe, but the adoption of virtualization on x86 servers, which make up 90% of the server market, is where the technology has seen its greatest growth.

The next question that enterprises should consider — should you invest in your own hardware infrastructure? and still bogged down with the troubles of managing the hardware 3 to 5 years down the road? another tech refresh? hardware component failures along the way?

We think, you should focus on developing your applications and run it well to support your business. Grow as you need it, and shrink it if you don’t. Let us worry about the infrastructure.

Posted by admin in Market Update on September 24, 2010 with No Comments

IDC (the research firm) has conducted a survey early this year on what would be the most popular workload that people going to use the cloud for.

The bottom 3 are the Agnostic ones, where people don’t really worried (or don’t care) if it’s not within their premise/control, hence the most suitable to be in the ‘public cloud’.

Workload remain the critical point when deciding on public vs private cloud deployment. Choice of deployment model is a business alignment issue.

To Cloud or Not to Cloud?

Posted by admin in Featured on August 23, 2010 with No Comments

Recently I was at a Cloud Computing seminar hosted by IDC (the research firm) in Kuala Lumpur, Malaysia.  One of the interesting slide they shared,  as below:

The survey clearly indicates that the market are pretty much ready to consider Cloud-based technology as part of their next IT investment in the next 12 months. The question is no longer about “To Cloud or Not to Cloud”, but rather “When can I move into the Cloud” — so that the organisation can enjoy all the benefits (or promised) the Cloud offers.

Based on my personal experience spending time with some of my key clients. The biggest question now is “Where do I begin?”

Talk to us, and we’ll share with you some of our experiences.